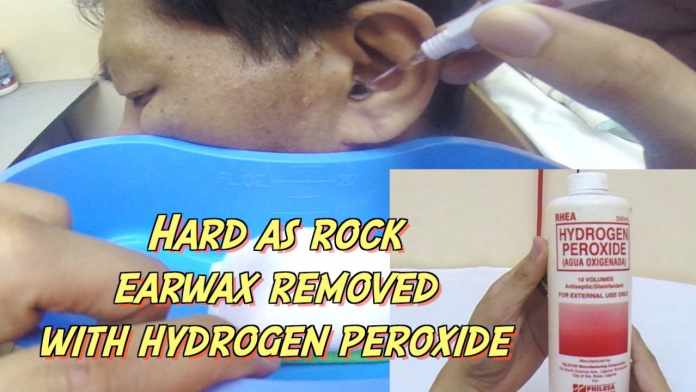 hydrogen peroxide in ear (formula H ₂O ₂ – oxygen-oxygen single bond ) is a light blue liquid type chemical compound; usually having a more thick consistency than water. Because of its antibacterial power, people use it as a disinfectant, bleaching substances, and oxidizer.

In our everyday life, we use Hydrogen peroxide in many ways, sometimes without even knowing that we are using it. For example- we use it for household cleaning. Hair bleaching, sanitizing beauty and pedicure-manicure tools, disinfecting oral products like toothbrushes, mouth guards, etc. This chemical compound is well known as a substance of plant growth. Mouth-wash, ear-cleansing, and other cosmetics or personal care products (in a small amount).

But today, in this article, we will not focus on all of those beneficial usages of hydrogen peroxide. This article will solely focus on the use of Hydrogen peroxide in the human ears. Especially on its usefulness as an ear-cleansing substance. In this article, you will get to know why and when we use it in human ears. The benefits, and the side effects of using too much of it. We will discuss a little bit about other alternatives also.

Self-cleaning human ears naturally produce antibacterial cerumen. Which is also known as earwax to lubricate itself and protect the ears from water and infection. Ceruminous glands, along with some secrete fats and acidic materials, mainly do the protection part.

Earwax or cerumen also works as a strainer for one’s ears. By trapping out dead skin cells, dirt, and dust like things. Because if these outer objects enter deep inside of human ears, then the occurrence of long-term damage can take place.

When and Why Exactly We Use Hydrogen peroxide in Ear

Once in a while, human ears make more cerumen than usual. Yet, it is not essential to remove this surplus cerumen. The reason behind this is, we human beings naturally help in the process of moving old or excess earwax. Moving it out of our ear channel to the entrance part of the Ear. We do it by chewing and moving our jaw when we eat or talk. Fascinating, isn’t it?

It is the ear opening where the earwax dries up and falls out naturally. Despite having a natural ear wax removal process, we often use cotton swabs or stick. Also, other types of pointy things inside our Ear to make it clean. There is also a high chance that we will end up with an unusual earwax blockage against our ear tympanum. Because with pointy objects, we will only be pushing the wax further inside of the ear path.

Moreover, swabbing or sticking pointy objects to the inner part of humanears can result in other severe problems. Like ear infection, rupture of the ear tympanum, and sometimes even considerable hearing loss. However, suppose a person still wishes to remove excess earwax properly or has no other choice but to clean it. Because the earwax blockage is against their eardrum. In that case, that is when Hydrogen peroxide comes into the big picture.

Multiple secured methods of cleaning excess earwax are within easy reach out there. For example- using cerumen-removing solutions or OTC (over-the-counter) Ear drops, baby oil, olive oil, glycerin, or any other mineral oil. Not to mention, using Hydrogen peroxide is one of those safe methods. One can use it even when he or she has glue ear, grommets, and eardrum perforation. I must also add that almost all of the earwax removing solutions contain Hydrogen peroxide. As a cerumenolytic ingredient (cerumen softening material). The wax banishes on its own and comes out easily. Otherwise, if the earwax gets hard, it doesn’t want to come out.

Wearing AirPods, in-ear headphones or earphones, using hearing aids, structural abnormalities of the ear canal. Cleaning the Ear with hair clips, cotton swabs, etc., are additional factors that provoke excess earwax issues. Suppose the natural earwax removal process fails for some reason. And too much earwax forms up in the ear canal, then cerumen impaction or earwax blockage occurs.

It happens (coughing) because the excess earwax simulates the vagus nerve branch. The auricular vagus nerve branch supplies sensation to the skin of the ear canal and auricle (outer ear/ pinna) One can use Hydrogen peroxide to remove earwax congestion for any of the above symptoms, and it’s safe. Doctors medically recommend it too.

Not to mention that one can go to the doctor. And the doctor can remove the earwax using suction or irrigation devices. But using Hydrogen peroxide at home is the best alternative.

Although these kinds of cerumen or earwax buildup are relatively rare, it can still happen. One thing to be mentioned, these signs do not always imply that earwax-blockage is the only problem. So, if one experiences any of the above symptoms for quite a while. Then it is still better and wise to contact a doctor. Examine the Ear to figure out the possible other causes. Because at the end of the day, prevention is better than cure. Early diagnosis can decrease the harm in the long run.

What makes Hydrogen peroxide so Special as an Earwax Removal Solution

An Interesting fact is, putting any liquid (olive oil, mineral oil, baby oil, ear drops) will soften it. Even wateron the earwax will soften it up. But then again, why do doctors recommend using H ₂O ₂ when it can be any liquid. Well, it breaks down the hard earwax by softening it with its liquid form. But in addition to that, H ₂O ₂ also kind of fizzes. And bubbles when it comes into contact with the earwax. Sometimes this fizzing can even push the wax out of the Ear, making it fall on its own. It is indeed an advantage that H ₂O ₂ has over the other earwax removal method/material.

H ₂O ₂ is a chemical compound having an oxygen-oxygen single bond. As a result, when H ₂O ₂ earwax drops come into contact with the earwax, it releases oxygen. The fizzing and bubbling action that we get to see is nothing other than a reaction. The reaction of H ₂O ₂ with hard earwax. It is the oxygen that softens the earwax plug.

How to Clean Your Ears with Hydrogen peroxide- A Proper Guide

In the article, we mentioned that hard earwax doesn’t quickly come out of the ear canal. In such cases, Hydrogen peroxide helps this waxy material of the Ear. To break it down by working as a wax softening agent.

Whether it be Hydrogen peroxide or any other over-the-counter ear drop. Containing this particular chemical compound, the advice is to follow the instructions or directions written on the packaging.

Caution: While instilling, one may feel a warm tingling sensation in their Ear. Because the Hydrogen peroxide solution is supposed to bubble out of the ear canal.

Side Effects, Downsides, or Risks of Using Too Much Hydrogen peroxide in Ear:

According to doctors and chemists, Hydrogen peroxide has quite a remarkable safety profile. If and only if it gets appropriately used. It is not safe to use at concentrations over ten percent (10%). Whereas, most of the over-the-counter (OTC) Earwax drops that contain hydrogen peroxide are nothing other than purified water. With three percent (3%) of H ₂O ₂.

READ  Why getting outside is good for your mental health

Yet, some people can experience several side effects, although this is very rare. Side effects, risks, and downsides of frequent or too much usage of H ₂O ₂ in the Ear are below-

Other Alternatives of Hydrogen peroxide

So, we hope this article provided you all the information you need to know before using Hydrogen Peroxide in Ear.

When will Illinois reopen.

Getting Ready for Social Changes With Alcohol Recovery