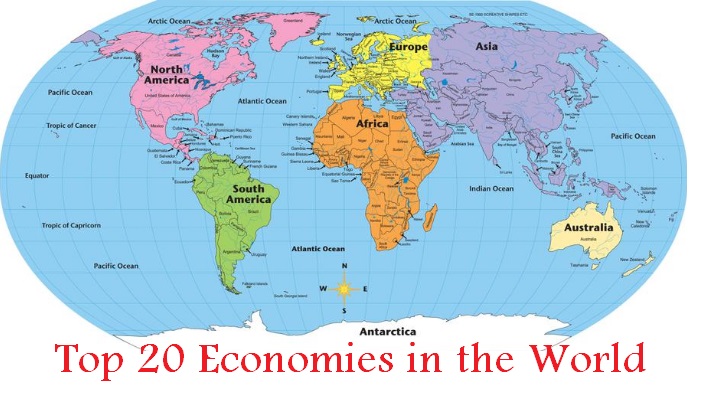 Different levels of economic cycles blend economies around the globe. In spite of that, it is amazing that the world’s top economies don’t easily bend their detained positions. The economies of 17 countries are still on the list with just 3 new additions if compare to the top 20 economies of 1980. The major economies remain the same positions.

The recent analysis indicates that these economies have a potential for growth. They command a majority of the global wealth. The minimum GDP of the top 10 economies hold more than 67% and top 20 participate more than 80% of the world’ economy.

We will discuss here the economic condition of the United States.

Economic Position of the United States

The United States remains its first position as the largest economy in the world since 1871. The total size of the U.S economy estimated at $19.39 trillion during the study in 2017. It would reach at $20.41 trillion in 2018. The United States considered as the economic superpower because the U.S economy comprises almost one-fourth of the entire global economy. The country has a significant amount of advanced infrastructure, technology, and natural resources.

It is noteworthy that the U.S economy is service-oriented. The country is contributing at least 80% its GDP and its manufacturing sector contributes more than 15% of its output. The economies analyzed in terms of purchasing power, the United States loses its top position to its competitor China. The U.S economy stood at $19.39 trillion in terms of GDP in the year 2017, and the Chinese economy following the U.S economy at $23.16 trillion. The predictions indicate a significant amount of growth and the expectations suggests the U.S economy reach at $24.53 trillion by the year 2023.

See also  Why is SGX Nifty Popular among International Investors?

How to Earn Interest on Your Cryptocurrency

DIFFERENCES BETWEEN EdD AND PhD

The long-term love and relationship of Diddy and Cassie, unfortunately, came to an end. However, they would still remain friends....