From the Legend of the Nibelungen all the way through history until J.R.R. Tolkien’s Fascination for Rings have occupied a special place in the history of the world and the minds of people from any period. Nowadays, these jewelry pieces are a common thing, but people still associate special meanings to them in order to increase their value, at least at a sentimental level. Skull rings are a special kind of exotic jewelry that was usually reserved for a select few, but which has since developed in a mainstream trend. Even so, they still manage to retain a part of the mystic they once had. Find why do people have a Fascination for Rings and how long ago did it started.

The History of Rings 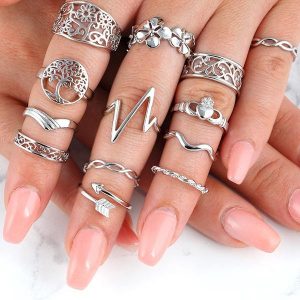 Nobody can say for certain when did man’s fascination for jewelry began. Archeologists have found traces of jewelry being made and worn in almost every period of human evolution. Although the shape and meaning of the jewelry varies from period to period, scientists are certain that their main function wasn’t the one jewelry has today. Jewelry in ancient times had a more profound meaning. It was used mainly to represent status and ceremonial meaning was usually attached to it. High priests and priestesses, and members of the higher classes, wore beautiful necklaces, earrings and bracelets in order to distinguish themselves from the common people. Jewelry wasn’t always made out of precious metals or had precious stones attached to it. Having a more symbolic role, it was made out of what was available to people such as carved stones or knitted young twigs.

Other things that people used to make jewelry out of were animal bones, teeth and claws. The oldest jewelry made out of animal remains was found in Croatia and dates back to the Neanderthal period, circa 135,000 years ago. Those pieces of jewelry revealed the fact that Neanderthal people were able to attribute value and appreciate the aesthetics of a decorative piece. The piece of jewelry found was a necklace or a bracelet, demonstrating that those proto-humans were capable of much more understandable than what was once thought.

As time marched on, and technology evolved, so did the jewelry men made. Once man discovered he can extract metal from the earth, and bend and mold it as he pleased, more and more complex and ornate jewelry started appearing. Fascination for Rings, although not a new concept, emerged as a new symbol, one that survived the passing of time and that has caught the imagination of people from all over the world and from all social standings.

Why Are Rings Important?

Rings are part of every culture on Earth. In one way or the other, the shape of the ring can be found anywhere one looks. During the course of history, the ring had various functions. The first ones were more of a ritualistic object while later ones have a more decorative role in people’s lives. The ring symbolizes unity and strength. Through its shape it symbolizes infinity, and unbroken circle that has no beginning and no end. Because round is considered the perfect shape, having no structural weak points, it was the perfect object to be used in order to symbolize the unity of two people or the bond between man and divinity.

Understanding why there is a fascination for rings. For instance, the engagement ring has its roots deep in the medieval understanding of the wedding concept. Besides being a symbol of the union of two persons, it fulfilled an important financial task as well. When knights, lords or kings left for battle, they would usually give a ring made out of precious metal to their beloved ones. This gift was a kind of insurance that, if the man didn’t come back, their loved ones could sell the ring and live off of what they got in return. In modern times, an engagement ring is so expensive because of that tradition. A rule of thumb states that a ring shouldn’t be less than 2 average salaries. So, not only is the ring a symbol of love in the abstract sense of the word, it is also a way of taking care of your loved one in the case of an unforeseen tragic event.

See also  Dryer not heating? What is wrong with your dryer Tips and tricks

Modern times brought the development of the jewelry industry. More and more models were available for both men and women. Custom made jewelry has taken an unprecedented leap forward, offering people from all over the world the possibility of finding something to their pleasing and that represents their individuality. This is how silver skull rings were born.

Usually associated with bikers, rock singers and fans and the people that have an attraction for the more obscure part of life, this type of ring has made its way to the mainstream trends and can now be bought at almost any jewelry shop anywhere. Although they do represent a bold statement on behalf of anyone that is wearing them, they are now a part of daily life and have come to be a common site almost everywhere. They are no longer reserved for the special few, but are available to anyone that feels attracted to the symbol they represent and want to express their uniqueness in a different way.

How to Choose the Right Skull Rings?

There are many things to take into consideration when choosing a piece of jewelry, especially when you’re talking about one as expressive as this one. Size is the first thing anybody should be mindful of when choosing any piece of jewelry. On the one hand it has to be the proper size as to fit the wearer’s finger and on the other hand it has to be big enough in order for anybody looking at it to make out what the symbols on it are. But any potential buyer has to be careful not to choose a piece that is too big, due to the fact that it can turn out looking disproportionate.

A second thing any buyer has to be careful of is the design. People looking for pieces of more exotic jewelry should have a broad strokes image of what they want to find when they go out to look for something. Luckily, todays’ jewelry can be customized to look like anything the wearer wants, thus taking the hassle out of searching through endless catalogues and shop windows.

Buying the Best Hat band for a Lady’s Hat