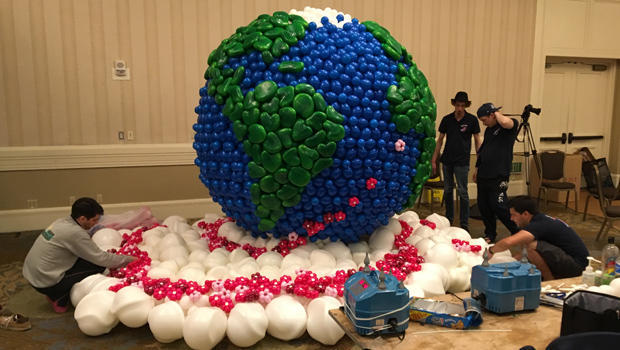 The dance floor inside a San Diego Sheraton had blown up with the World Balloon Convention (WBC). A number of groups came together for one week in making some fun.

They traveled from all around the world to participate in the World Balloon Convention. It is a friendly competition because the balloon world isn’t too big. The WBC takes place after every two years.

More than 1.5 million balloons were free at the event. These balloons were provided by the Pioneer Balloon Company. Ted and Betty Blamis are operating the company and true believers in the art.

Ted said, “You take a very simple product that doesn’t look like anything in its shrunken form, and then you add magic to it by either air or helium going into it”.

Connie Iden-Monds resident of Nashville, Tennessee, is a balloon artist. She said, “The World Balloon Convention is our Oscars, it’s our Academy Awards”.

Almost all balloon artists begin with the basics using a few quick twists and turns. They can easily form a hat, dog, or sword. Iden-Monds initially trained her team members how to make a flower.

The team of Iden-Monds finally reached in San Diego. They had 27-hours to put together a large balloon sculpture from the beginning.

She was working on a much larger idea just a month before the competition. She had employed a brilliant team of balloon-artists from across the country to discover specific talents.

Iden-Monds was relaxed after finalizing the entire work. She said, “I’m happy to have had a good night’s sleep after 27 hours. I haven’t stayed up that long since college”.

The final decision was up to judges, including Sue Bowler, after forming shapes of balloons from all teams. There were awards for Best Hat, Best Small Figure, and Best Fashion.

After the arrival of the big night of the World Balloon Convention, the Tiger from Taiwan won the first place. The Wolf from Russia got the second position. The team of Iden-Monds took 3rd place.

It is noteworthy that the winning sculptures will not go back to their homes because balloons are considered a temporary medium.