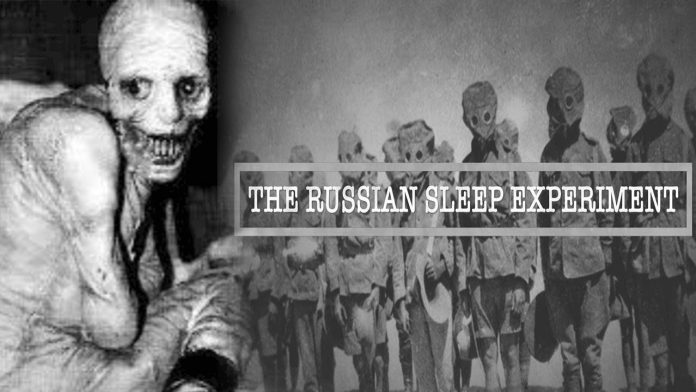 We all need Sleep for a healthy life, but rest is often neglected for our everyday function. What will happen if we don’t sleep for a long time? Well, in 2010, an anonymous writer wrote about “The Russian Sleep Experiment” and it exploded on the internet. That article reveals a horrifying story about depriving sleep experiments. Since then, the whole world is wanting to know about in-depth of it & is that taken place or not? We have come up with all the answers in this article. Go through it & reveal the unknowns.

Origin of the Russian sleep experiment

Knowing about the history & origin of something provides us the hidden view that can change our perspective. So, knowing about the source is essential & we will let you know that in this section.

The Beginning Of The Story the Russian sleep experiment

The experiment was about staying awake those five prisoners for 30 days in a single cabin with the assistance of a stimulant gas. But why did Russia do this kind of experiment? The reason behind this is to gain power over other countries in the battleground. That experiment was conducted during the World War period, to create some super soldiers.

Beginning of the Russian sleep experiment

The pagination article says, the Russian military set up a test area where five prisoners would stay, and that was a sealed environment in which the scientists could release stimulant gas and check if the levels of oxygen were ok. There was dried food, a bed for each prisoner, running water, and a toilet in that test chamber. There were cameras and microphones set up so the researchers could see and listen to the subject. Those five-man seem in good spirits for the first five days. The gas was doing a good job, and reachers were happy about it.

Outcomes of the Russian sleep experiment

Every experiment reveals something. Those political prisoners were promised freedom in a condition. The condition was lasting a specific time in the chamber with a stimulant gas. The specific time was 30 days. The gas will deprive them to sleep. But the Russian scientists had no clue about the consequences of that experiment. After 15 days, the scientists found out that subjects were turning into zombie-like creatures. So scientists had no other way but shot them to death.

No experiments come with fewer controversies & this is not apart from them either. Few also marked it as propaganda & related things; however, this section might answer all the doubt you have in your mind.

Is “The Russian Sleep Experiment,” a real story?

Well, do you believe this story is real? If you think anyone among these stories, then probably you are new here, on the internet. That is only a story published on a horror fiction website called “Creepypasta” in 2010. However, the original one is much older. That was just written for a forum. The forum was online based. The discussion was challenging their users to have or make scariest “urban legend’. But are you still confused?

Well, that article did go fat and spread widely. So, often people start believing. It’s real. Let us clear your doubts. That story is not valid. There are some reasons for this. Let’s highlight some of them.

If you logically think about these two-point, you will find out this story is not valid. Well, it was the world war II period. At that time, the Soviet Union was actually behind several scientific experiments. Starting in the early stage of 1900 to 1980, these experiments were done. A maximum of them was done by Soviet Union secret services. And also, they never hesitated to conduct unethical human experiments that way beyond imagination.

There are a lot of intimate experiments done by the SU. One of them was “Poison Laboratory”. It was a secret facility. A professor of medicine guided it.  A lieutenant led this. This research was of testing poisons and developing them into deadly weapons. These are called “Biological Weapons “.

In the laboratory, human experiments were getting intense. There were various purposes, but the main was for finding some deadly poisons. Poisons that can be invisible. No one can detect those. Well, it may not be as terrific as “The Russian Sleep Experiment”. However, they terrified most of the powerful nations of the world.

Now we see Russia has a horrifying history of unethical experiments. And for this creepy history, a fictional story like “The Russian Sleeping Experiment” sounds like a real event for many people.

Caution before Experimenting it at Home

The human mind is curious & fascinating. You might be thinking about doing it at Home or experimenting with it on you. However, you should know a few consequences before thinking about it further.

Effects of not sleeping

Lacking Sleep for days can lead us to many sufferings. It can cause health problems. The thing is, it never pushes any human to be a zombie-like creature. Our body is like a machine; it needs a particular hour of Sleep every day. Lack of sleep can lead us to deadly accidents. Sleep disorders like insomnia can also cause sleep deprivation. People think that insomnia will go away on its own. But insomnia is a severe disorder, and it requires proper treatment.

A boy from California, USA, didn’t sleep for about 11 days. Are you surprised? Do you want to know when this had taken place? According to a few sources, the time mentioned is in 1964. He was attempting to make a Guinness world record in this category. However, his attempt has caused him severe damage to his internal organs.

Sources say that he suffered from damp memory, dizzy concentrations, and mostly the controversial one- hallucination. But the news of peace is that what you have learned from this article about the Russian Sleep Experiment, the boy didn’t show any of those horrifying outcomes. However, probably, you are eagerly waiting to know about what was the result of his attempt. Had he entered into the Guinness book of record? Unfortunately, No, he didn’t. He went off deep Sleep after that attempt & missed the deadline of the submission.

Most probably, you are thinking about who got the title then? Yes, it is a matter of interest, right? So, let me tell you that no one from above got the title. So, who’s that? That girl is from England. As a part of the “Rocking Chair Marathon,” this girl went without Sleep for straight 18 days! Can you believe it?

This incident happened in the year of 1977. But, the main thing is she also did not become a zombie, monster, or anything dangerous creature like these. So, if there is anyone out, wanting to go without Sleep for the record, it is of no use. No one should do it as it is not suitable for the human body.

The Importance of Sleeping

Sleep has much importance for both physical and mental health. We can say it is one of the vital elements for human bodies. Proper Sleep makes sure the soundness of health. Sleep has a significant effect on heart patients. Sleep helps in the healing and repairing heart and blood vessels. Proper sleeping has many more health benefits. Let’s know about these.

Now, let’s talk about the problems of deficiency of Sleep. Humans mood largely depends on Sleep. Lacking Sleep causes a bad mood or a disturbed mood and many more sufferings.  Let’s see some more sufferings from sleep deficiency.

So, these things make one thing clear that Sleep is important. The deficiency of Sleep is harmful. Having proper sleep or rest helps to prevent many diseases. So, for getting ready for the next day, one should have proper Sleep.

Is it possible that “The Russian Sleep Experiment” is a true secret experiment?

How many hours should an adult sleep every day?

Why is Sleep so important?

Is sleeping related to a stronger immune system?

Lacking Sleep may cause many health disorders. So, Some of them are obvious, and some are not. Some can be long term too.  But none of these causes any kind of behavior like said in that article. But you should not go without Sleep. Before, Everyone needs proper Sleep. It is equally important, like your daily necessity- food and air. There, Good Sleep can maximize problem-solving skills. However, “The Russian Sleep Experiment” is not a real story, but it helps us to understand the value of proper Sleep. In summary, we all should follow a good sleeping pattern for a healthy life.