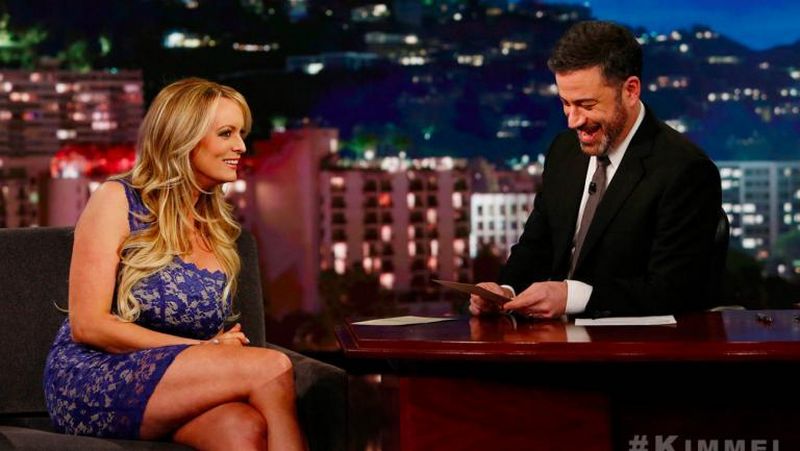 “American Horror Story” star will be getting ready to face the disaster of criticism from the MAGA fans and followers as they will be logging in their social media account after watching Daniels’ interview with Jimmy Kimmel.

Daniels brought back some new intimate details regarding her alleged 2006 affair with the current president of the United States of America.

“Can you hold it up so it’s coming at me at the correct angle?” Daniels said when Kimmel offered her hand-crafted mushrooms to compare with different sizes and shapes.

“Which of these orange mushrooms would mostly represent the commander-in-chief of the United States military,” Kimmel asked his guest.

The funny host of late-night TV show suggested that Daniels had “made love” with Trump. “Gross! What is wrong with you? I laid there and prayed for death,” the adult entertainer replied in a hilarious way.

She further told, “Do you know how much hate mail I’ve gotten from people who love Mario Kart? … In one day, I managed to ruin half of America’s childhood and mushroom farming everywhere.”

At the later part of the show, “No, don’t say put it back in”, Daniels said after Kimmel was going to put back the mushroom into board saying, “I’m gonna put this back in here.” It was really awkward.

The Wall Street Journal reported earlier this year that Trump’s personal lawyer Michael Cohen paid Daniels $130,000 in October 2016. The purpose of paying the amount a month before the presidential election was to stop her discussing her allegedly 2006 affair.

The president Donald Trump has already denied all the allegations.

Kiernan Shipka Shared a Photo of a Childhood #Halloween Costume

Kiernan Shipka might be fully involved in The Chilling Adventures of Sabrinacostars. However, her allergy to her new project hasn’t...