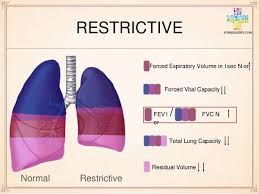 The disease is a collective term used more frequently than ever. Due to the increase in environmental pollution, the chance of affecting restrictive lung disease is exceptionally high. It is challenging to define disease precisely because of numerous factors behind it.

Among all the diseases, respiratory illness is widespread, as well as severe. Every year several million people die in this. The number of affected people is countless. Some of the world threatening pandemics such as influenza and COVID-19 directly connected to respiration.

So, one question may be bugging on your mind that what is a disease and respiratory diseases? What are the causes? In this article, we will focus on respiratory illness, such as obstructive and restrictive lung disease. If you are curious and want to be more cautious about it, stay with us, and check out the full content.

What is a disease?

Generally, disease means the abnormal condition of the body. Besides, it may occur due to external as well as internal elements. The symptom of sickness may expose as infection, inflammation, internal organ failure or malfunction, etc. But the thing you should be clear that injury due to any kind of accident is not to consider as a disease.

In summary, illness or disease represents the disruption in function and negative anomalies in physical structure. There are various types of conditions based on organ, take place in our body. Some of them related to heart, lung, kidney, and many more. Each body part expresses different signs and symptoms.

There are diverse reasons and ways to infect by disease. Mostly, people get attack by microorganisms such as virus bacteria and fungi. Microbes are microscopic on size and impossible to see by naked eyes. So, the chances are high to affect by it. Other causes include environmental pollution, genetic anomalies, reckless lifestyle, malnutrition, food, and feeding habits.

What is a respiratory disease?

Lung disease refers to the imbalance functionally of lungs. Lungs are organs which help us in breathing. The most significant sign is breathing difficulty. Therefore, it will be difficult to take sufficient oxygen inside of our body for breath.

In the case of obstructive lung disease, it is difficult to breathe out air. People struggle to exhale inner air from the lungs. Due to a lack of proper breathing, people fail to take a more extended breath.

The problem is that the proportion of intaking and ejecting air is not the same. When the volume of intake and breath out oxygen is the far difference, people suffer respiration. Slow out breathing restricts the airflow and reduces the oxygen level. Reduction happens because of lung damage. There are different types of obstructive lung disease.

There are different types of obstructive lung diseases. The most common ones are bronchial Asthma, chronic obstructive pulmonary disease (COPD), bronchiectasis, bronchiolitis.

It is a common condition that affects the airways and creates a breathing problem. Besides, airways are the small tubes that transport air in and out of the lungs. Asthma occurs when airways trigger by defined factors. Therefore, the space of the tube gets narrow gradually. The inflammation and sticky mucus create thick the tube wall. The process reduces airflow Asthma is prevalent worldwide. The condition may occur in childhood or adult. Also, it may come genetically or environmentally.

The inhaler is the first medication of Asthma. But use it when doctors recommend them. To relieve from Asthma, you should avoid cold weather, cigarette smoke, pollution, pollen, dust, mold, chemicals, animal fur, stress, and anxieties.

COPD is a long-term disease. It causes due to inflammation in airways and restricts the airflow. The term includes several breathing conditions which are chronic bronchitis and emphysema. Smoking, air pollution, dust fumes, and wood smoke can cause COPD. The symptoms are like Asthma. Symptoms include shortness of breath, wheezing, chest tightness, and chronic cough.

Due to COPD doing regular physical activities and exercise is more laborious. Also, it causes damage in the air sac (alveoli) of bronchioles. The alveoli lose its flexibility, and the sac gets larger. So, the air trapped in the sac and oxygen supply reduce. Besides, COPD affected lungs fail to exhale the trapped air. That’s why taking a fresh breath is troublesome for COPD patients. It is one of the severe respiratory problems all over the world.

It is always the best time to consult with experts at an early stage. Firstly, the doctor checks the external appearance of the patient. Secondly, the affected person forcibly suggested taking an intense breath. While breathing, a mouthpiece adds on the mouth, which connects with a machine. The tube collects the volume of air-breathing to calculate the rate. They are then comparing data with optimum breathing rate to specify the problem.

The doctor will take oral interviews from the patient to know the history. It gives the overall information and medical condition the person requires.

Diagnosis through physical examines and CT scan or X-ray of the chest region. The reports help the doctor to analyze the health condition of the person.

The objective of obstructive lung disease the treatment is too broad the airways.  Bronchodilators are the drugs that eliminate inflammation, increase airflow, and keep bronchial tube muscle relax. It opens the airways so you can breathe better.

Inhaler it the best medication treatment for this disease like Asthma, such as inhaled corticosteroids (ICS). But steroids have some side effects like weight increase, emotional change.

Phosphodiesterase-4 of PDE-4 inhibitors such as theophylline prevent inflammation.  Some oral medicine use for COPD is methylxanthines.

Antibiotics are another medication it controls bacterial lung infections.

Avoiding smoking because it increases that of COPD lung disease ranging from 35-50 percent. Regular exercise improves the capacity of the lungs. Besides, avoid dust and pollute the environment reduce the chance.

Due to the breathing problem, oxygen deficiency takes place in the body. For supporting breathing nasal cannula and ventricular use for the supply of oxygen.

The term restrictive lung diseases indicate any condition where there are not enough volumes of the lungs left to allow the air to go in. It means the restriction of lungs in respiration activity. It is a condition when the expansion of the lung is difficult. The situation arises because of the stiffness of the lungs.

Due to, breath people take fresh oxygen from the air. But, when the wind comes through the airways into the lungs, then lungs do not expand. It makes breathing extremely difficult. The volume of oxygen air intake gets limited, and respiration complexity takes place. Lung expansion reduces by nerve damage, the hardness of chest wall, and loss of chest muscle mobility.

All the restrictive lung diseases are in 3 main categories. The classes are extrapulmonary, pulmonary parenchyma, neuromuscular. Let’s mention the sub-divisions

Here, muscles do not work, and below diseases occur.

As we know, the lack of lung expansion reduces oxygen intake. So, providing additional fresh oxygen into the lungs will help to take a breath. The therapy depends on the patient’s requirements. It may be on an occasional or daily basis. Due to, flammability of oxygen, it is risky to use. So, try to approach with proper caution. The therapy overdose may cause migraines, skin irritation, etc.

READ  WHY HEALTHCARE DEGREES ARE ON THE RISE

Both lung diseases relate to respiration difficulties. The main difference is obstruction creates exhaling problem and restriction generate inhaling problem. Due to that patient cannot take a full extended breath. The symptoms of both diseases are quite similar.

Internally in both cases, inter-organ faces some factors. These are the reasons why these diseases happen.

The longer the symptoms keep appearing, the situation will get worse. Importantly, an independent lifestyle will trigger the sing of disease.

Breathing is primary and continuous physical activity. The process allows oxygen to come into the bloodstream through all the organs. So, we can realize how vital respiration for living. People suffer from diverse types of respiratory diseases, and this includes obstructive and restrictive lung diseases. Every year all over the world the number of affected people increasing.

Besides, our environment is getting polluted dust particles that are favorable for this kind of disease. There are other factors, including lifestyle, heredity, etc. The consequence of these is severe. So, we should prevent it at an early stage; otherwise, your life will be at risk. In conclusion, there is always hope if we take proper treatment and aware of our instinct to avoid the possible danger.

5 Benefits of Entering a Detox Facility

Does Coffee Dehydrate You And Harm Your Performance

3 Pain-Free Ways to Save Money in an Hour

We all know how important it is to track our budgets. You need to keep a close eye on what...