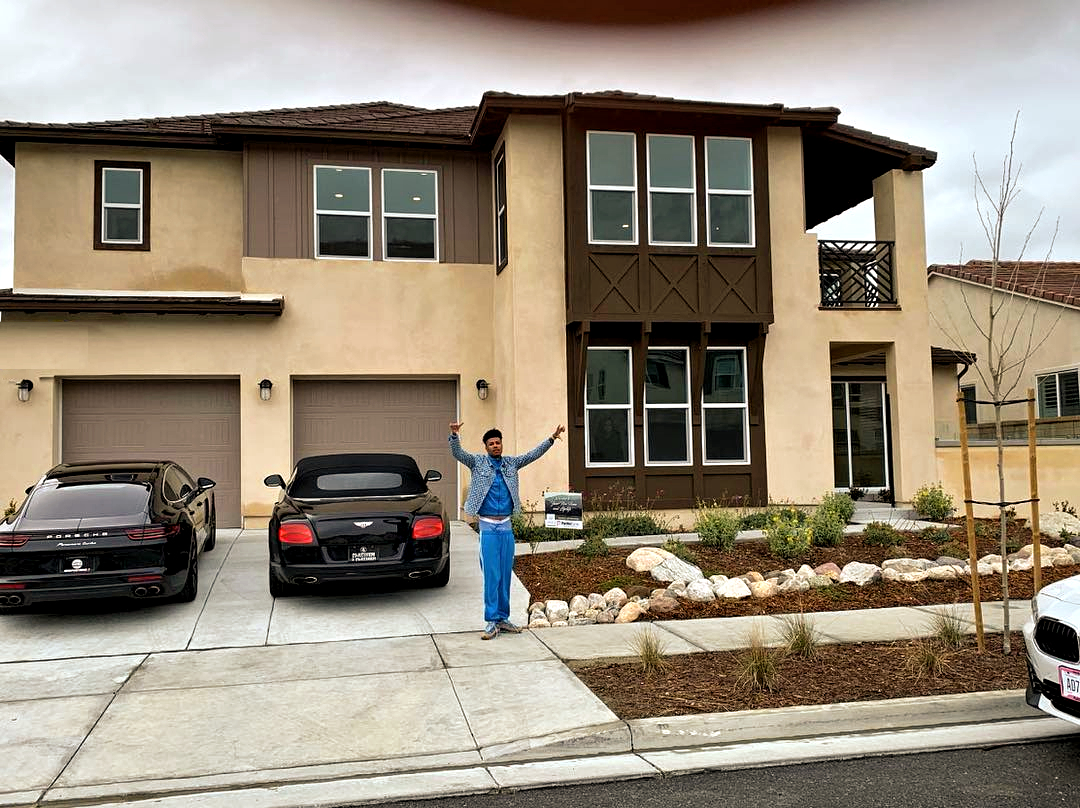 Hip-Hop is in the house once again. 50 Cent just sold his Connecticut Mansion for $3-million-dollars. The Southside Jamaica-Queens Legend donated the sale to his G-Unity charity foundation. YouTuber Timothy Delaghetto got married and bought his first home with wife, Chia.Now, a new rapper is stepping his ‘casa’ game up. Blueface Bleedem announced on Instagram he bought a million-dollar home in California, which comes with a side of about $10k taxes annually.

The actual exact price of the home is said to be $1.2-million-dollars. Based on Smart Asset’s Los Angeles County average tax rate calculations, the School Yard Cryp will be chunking out an additional $10,000 in property taxes annually.

The home purchase is not a bad idea.Being that it is a used home, it’s quite a smart move by the currently super-hot rapper. While his net worth in 2019 is only estimated to be at $1.5-million-dollars, he is raking in the ‘dough’ hand over fist. Blueface’s current single “Thotiana” is one of the hottest new songs of 2019.  From this, his coming royalty checks will likely cover his home expenses for years to come.

Beyond the single, he has over 100,000 followers on YouTube and 3.1 million followers on Instagram.He can leverage the audiences for enough to pay for his house a few times over.In fact, his net worth may be underestimated based on his followership.

If he should have any problems paying the mortgage note or property  taxes however, Blueface won’t be calling the nationwide tax experts. This home will likely appreciate in value, giving him a profit from resale.  With its price being under $2-million-dollars, there are plenty of buyers in the area who would likely be enthusiastic about owning a rap star former house.

See a photo of Blueface’s new California mini-mansion above.Watch a video tour of the house here below. It appears he’s also purchased some nice cars to ride around Los Angeles in.Parked in the driveway are a Black Bentley coupe and a black Panamera Porsche.

A side note about Blueface Bleed ‘em that’s gotten many talking is his noticeable lack of speaking on social media about Nipsey Hussle’s death.  It’s alleged his School Yard Cryps faction of the “Crips,” though also under the blue flag, does not get along with Nip’s Rolling 60’s gang.

However, it’s clear the “Victory Lap” rapper was far above being stuck on colors and gangs, some are starting to speculate Blueface is not on that higher frequency of thought. At the same note, perhaps he is just keeping his griefs private. The “bleed em” rapper will hopefully show up with his manager Wack 100 in support of renaming of the Crenshaw Boulevard & Slauson Ave intersection to Nipsey Hussle Way.