Meghan Markle is getting to for the royal tour to Australia, New Zealand, Fiji, and the Kingdom of Tonga. It’s starting from next month, but she has started to change her look already for different occasions.

The Duchess has become a fashion and style icon. She has millions of social media fans who always love her look when she goes to attend any event. Fans share her new makeup ideas, hairstyle and royal dress on social media websites.

She recently arrived at the Coach Core Awards 2018 at Loughborough University on Monday where she showed her new hairstyle 2018. She also proved herself an active sporty person who can play in heels.

She was looking absolutely stunning and glamorous wearing navy top by Oscar de la Renta and Altuzarra flared pants. Her sleek hairstyle provided her an eye-catching look. She completed her look with a delicate necklace and million-pound smile.

The Duchess of Sussex kept her hair down and pin-straight at the event, according to Daily Mail’s Rebecca English, who shared a video on Instagram.

The Duke and Duchess also appeared on British broadcaster ITV show “Queen of the World.” They shared a romantic moment about the royal wedding dress which Meghan wore on his bid day.

Meghan revealed a hid-romantic moment in a sneak peak of a new two-part show honoring Queen Elizabeth II premieres on September 25 on ITV. 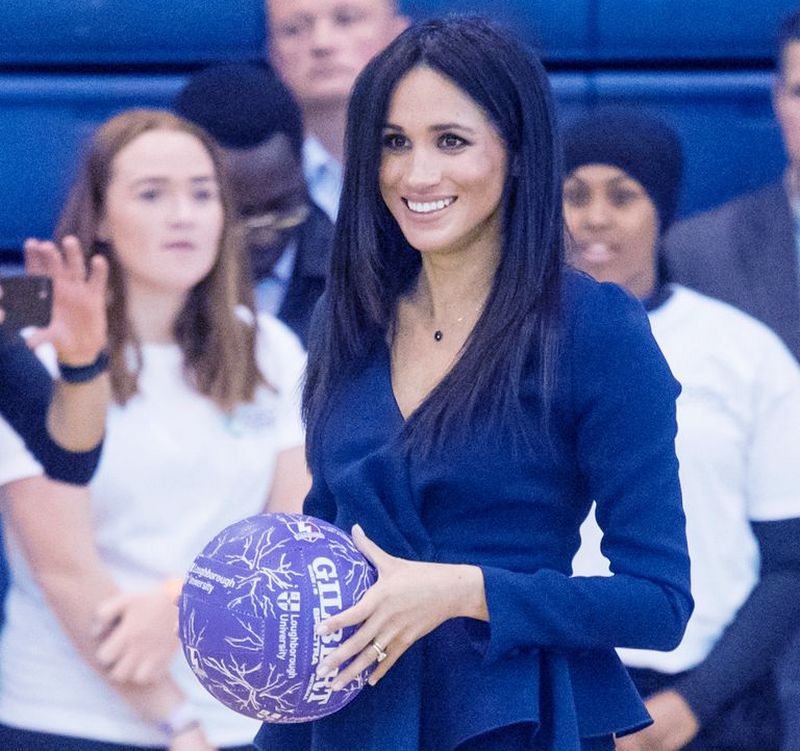 “Somewhere in here there is a piece of, did you see? There’s a piece of blue fabric that’s stitched inside? It’s my something blue,” she revealed.

“It’s fabric from the dress I wore on our first date,” she continued with a sweet smile. Meghan Markle wedding dress will be displayed in an exhibition next month.

Last week, Meghan also stole the event of launch of her charity cookbook. A video has gone viral on social media from the event when Prince Harry was caught red-handed while stealing samosas. You can watch below a clip from the video, tweeted by ITV.

Hungry Prince Harry seems to be taking a snack home after attending the 'Together' cookbook launch with Meghan and her mother pic.twitter.com/Uta8EPB5R8