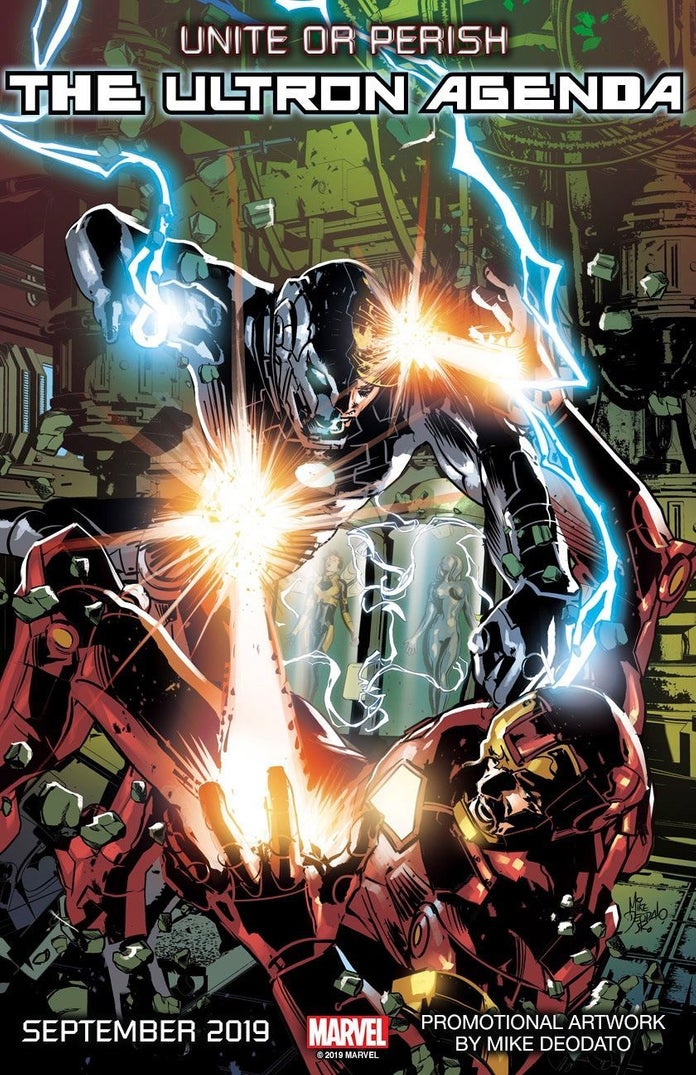 If we talk about Marvel Universe, then we know very well that it is facing a War of the Realm. Many Heroes from the earth are facing different threats. But nothing is more significant and more robust than Ultron who is making a come-back.

Ultron is a half human –half cybernetic being. He merged with Hank Pym, so we can say that this time he would take things and fight personally.

Marvel teases a promotional artwork designed by Mike Deodato. In that picture, you can see that Ultron is fighting with Iron man inside a Laboratory whether other characters such as The Wasp and Jacosta are inside the tubes.

This event is titled as “Unite or Peris The Ultron Agenda,” at the corner of the teaser you can see its release date which is September 2019.

What will happen in The Ultron Agenda? It is not easy to say anything at this point because we don’t know much. However, what we know that when Ultron comes, a big mess follows him. His agenda is destruction, and he knows how to limit the power of our superheroes.

Last time, he killed Magus to get an infinity stone which he lost it to Adam Warlock later. He might fail in acquiring infinity stone, but he got some success in infecting earth’s citizen with a virus. The Avengers find a way to stop him, and it was the time when he merged with Hank Pym and appeared as a half-human and half-cybernetic being.

Ultron is famous for spreading damage and destruction. He took over the world in Age of Ultron when he fought with the hero and pushed them to their limits. He fell because of team efforts of a small group of heroes.

READ  Money Heist Season 4: Here's Everything that You Need to Know so Far!

Now he is coming back, and we are imaging him stronger than before.

We need to wait till September, to get complete idea about the real gameplan /agenda of Ultron. Are you excited about his return? Share your opinion with us.

Fans of Selena Gomez are waiting for her new album. Good news is that last night Gomez teases that she...